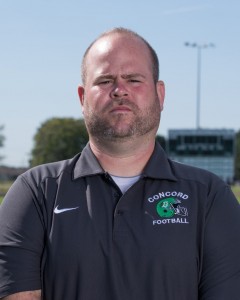 CHS Head Football Coach Craig Koehler has been named the Indianapolis Colts Coach of the Week for Week 3.  This comes after the Minutemen (3-0) defeated #1 ranked NorthWood 15-12 on September 1.

The Indianapolis Colts Coach of the Week program, presented by Anthem Blue Cross and Blue Shield, awards outstanding high school coaches for their hard work and dedication, as well as their success on the field and in the community.

The Indianapolis Colts and Anthem Blue Cross and Blue Shield have launched the 2017 Coach of the Week program. All head coaches in the state of Indiana are eligible regardless of their school size, league or division. Coaches are evaluated on various factors including the coach’s impact on his team, school and community, as well as performance of the team. The honorees are selected by a panel of high school football media, former athletic directors and other football representatives from all regions of the State.

In addition, all of the 2017 winners will be recognized at a Colts practice visit, and an on-field ceremony at an Indianapolis Colts home game. Each winning coach will also be presented with a certificate, as well as a $2,000 check for their school’s football program. Each award is made possible through a $1,000 contribution from both NFL Foundation and Anthem Blue Cross and Blue Shield.